On December 13, the anniversary of the death of the “Egyptian cinema kitten”, Zubaida Tharwat, who captured the hearts of many since her first appearance on the screen with her angelic face. Her innocent smile and delicate features. With her charming beauty, she won many titles, as she is “Miss East” after winning the Al-Jeel magazine competition to choose the most beautiful teenage girl. She also won the competition for the 10 most beautiful faces of cinema, which was organized by Al-Kawakeb magazine.

Although her acting career does not exceed 40 works, she has left an immortal imprint in the public’s conscience to this day. On the anniversary of her death, let us learn about Zubaida Tharwat’s acting career, and the most prominent landmarks of her life

Zubaida Ahmed Tharwat was born on June 14, 1940, in Alexandria. She has a twin sister named “Hikmat” and three male brothers, “Salah, Alaa and Kamal”, and her father was a captain in the Egyptian Navy. She is of Circassian origin and belongs to the royal family. Her maternal grandmother is Princess Zubaydah, the daughter of Sultan Hussein Kamel, the first Sultan of the Muhammad Ali family. Her father was keen to hide this information after the 1952 revolution.

She studied at Al-Raml Secondary School in Alexandria, then joined the Faculty of Law, and worked for a while as an apprentice lawyer in the office of the lawyer Labib Moawad, in order to please her grandfather, who wanted her to be a successful lawyer like him, and he rejected the idea of her acting, even threatening to deprive her of the inheritance. In addition to her studies of law, Zubaida Tharwat also studied at the Conservatoire, learned to play the piano, learned ballet, and studied languages and literature at the Oxford Institute. Besides that, she also learned equestrian sports.

Zubaida Tharwat’s debut came by chance, after her pictures were published in “Al-Jeel” magazine due to their winning the title of “Miss East” in the “Most Beautiful Teenage Girl” competition organized by the magazine. Where she caught the attention of director Mohamed Karim, and chose her to participate in a small role, to appear for a few minutes on the screen in the movie “Dalila” in 1956 with Shadia and Abdel Halim Hafez.

In 1957, director Kamal Al-Sheikh assigned her the first starring in the movie “The Little Angel”, with Youssef Wahbi, Hussein Riad, and Yehia Shaheen.

After that, Zubeida Tharwat’s films rolled, and her acting credit amounted to 27 films, the most important of which are “A Day of My Life”, “Lost Love”, “A Very Jealous Wife”, “Women in My Life”, “How to Get Rid of Your Wife”, Me, My Wife and the Secretary”. The list of the 100 best films in the history of Egyptian cinema included two of her works, “A Stranger in Our Home” and “The Sinners”.

She also acted in 6 plays, including “It’s a really respectable family”, “Who can beat who” and “I, she and my wife”. Zubaida Tharwat participated in one television series entitled “Endless Loyalty”. She acted also in two radio series, “Red Qalbi” and “Fawah wa Rabbit”.

Zubaida Tharwat was known for her multiple marriages, as she was married 5 times. Her first marriage was in 1960 and she was barely 20 years old. She married Ihab Al-Ghazawi, an officer in the Egyptian navy, and this marriage lasted only nine months. She separated from him without having children because of the incompatibility between them. After that, she married the Syrian producer, Sobhi Farhat, who is the father of her four daughters, “Reem”, “Rasha”, “Maha” and “Qismat”, and lived with him for a long period that lasted for more than 8 years. After her separation from him, she married engineer Walaa Ismail, and quickly separated from him before 6 months of marriage have passed. As for the fourth marriage, it was with the actor Omar Nagy, who was at the beginning of his filming career, and their marriage did not last long. Her last marriage was to a Lebanese hairdresser, called “Naim.”

Zubaida Tharwat was put in a strange and shocking situation before entering the filming community, as she loved to draw and was waiting for the day off from school to get out of the house and paint landscapes. One day, she chose one of the places she liked, so she sat down, took out her papers and colors, and started drawing. While she was distracted, she was surprised by a soldier who grabbed her by the hand and escorted her to the officer, thinking that she was a foreign spy because of her blond hair and green eyes. Zubeida tried to convince him that she was Egyptian, not a foreigner or a spy, and that her father was a naval officer. But her pleas did not satisfy him, and the soldier did not believe her and insisted on his position. She went to the officer, and when she told him the story, he burst into laughter, and told her that there are areas where photography or drawing is prohibited, and that she was drawing around a military area. Then he returned her drawing tools and released her. 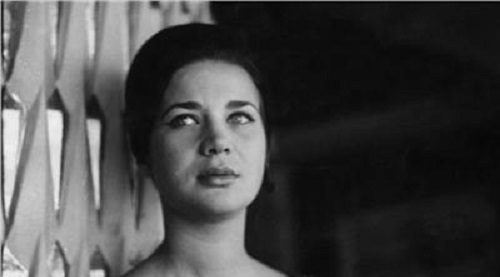 After Zubeida Tharwat married producer Sobhi Farhat, she stayed at home for a long time until boredom took hold of her. So she decided to return to acting, and initially thought that she had dissuaded her husband. She went to meet Abdel Hamid Gouda El-Sahar, Chairman of the Board of Directors of the Cinema Foundation, to tell him of her desire to return to acting. The news was published in a newspaper. Sobhi Farhat found that producers started knocking on her door, and scenarios started pouring in on her. One day, he changed the home phone number, and when Zubeida asked him about the matter, he told her that he refused to make her act again. She became angry and frustrated and attempted suicide by swallowing an entire box of sleeping pills. Her husband called the doctor to save her, but she continued to resist him, and her nervous condition reached the point where she slapped the doctor several times. Until the pills put her in a coma, the doctor gave her a chance to save her. Zubaydah spent the night between life and death, and was confined to bed for several days until she regained her health.

Zubaida Tharwat made only two films with Abdel Halim Hafez. The first was her debut film, the movie “Dalila” in 1956. The second is her most famous work, which is the movie “A Day of My Life” in 1961.

Zubaydah stated in one of the television interviews with the anchorman, Amr Al-Leithi, that Al-Andalib loved her and asked for her father for her hand in marriage, but he refused because of his work as a singer and her father hid the matter from her She indicated that she did not know until after her second marriage, and after her married life stabilized and she gave birth to her four daughters. She asserted that if she had known at the time, she would have immediately agreed to marry him despite her father’s objection, because she was in love with him and fell in love with him since she first saw him. Zubeida recommended that she be buried next to Abdel Halim Hafez after her death, but her family refused this matter and buried her in the family cemetery.

As for the strangest marriage proposal she received in her life, Zubaida Tharwat revealed that it was from the famous Brazilian football player Pele. Who she met by chance while she was in a hotel in Kuwait in 1973. Where he came towards her and put on her a collar of roses, and she did not recognize him and thought that he was a fan. But she was surprised when she returned to her room by his attempts to call her by phone and ask her to marry him, but she refused.

Zubaida Tharwat decided to quit acting early, so the play “A Very Happy Family” was her last show in 1985. While the movie “Forbidden Love” was her last movie in 1976.

As for the reason for her retirement from art and fame at the height of her brilliance, it is due to the fact that at this time she had become a grandmother after her first daughter “Reem” gave birth to her first child, and asked her mother to help her raise the child. Later her daughter “Rasha” became a mother as well, which required her to take care of her. With her daughters and grandchildren, she left the art scene of her own volition. She decided to immigrate to America with her daughter “Maha”, who was living there with her husband. However, after several years, she returned to settle in Egypt until her death.

Zubaida Tharwat passed away on December 13, 2016, at the age of 76, after a long struggle with breast cancer. What made matters worse was that she was a heavy smoker, which led to her lung cancer. Where she was receiving treatment for three years before her death.