December 13 is the birthday of the actress Camelia, nicknamed the blonde cat. She quickly rose to prominence and achieved great fame in record time. Everyone loved her, starting with the people, passing through her colleagues in the artistic community, and ending with King Farouk, King of Egypt and Sudan. Just as her artistic rise was rapid, her end also came quickly and tragic, to her death in a mysterious accident that was raised by many rumors. After a life full of hot artistic and political events, it could be the story of a successful movie. On her birthday, we will review with you in the following lines the story of her life and the most prominent events in her artistic career.

Lilian Victor Levi Cohen, the real name of the artist Camelia, was born on December 13, 1919, in the Azarita neighborhood of Alexandria. To Christian parents of Italian descent. However, her father decided to separate from her mother and return to his country after her birth, because of his desire to have a son. When the baby was born a girl, the differences between the spouses increased, so her mother asked for a divorce, and then she married the Greek goldsmith, Jew, Victor Cohen, who adopted the girl and gave her his name. 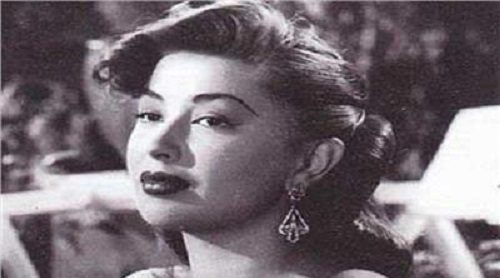 When Camelia was 17 years old, specifically in 1946, director Ahmed Salem saw her at a public event at the “Windsor” hotel, and he was very impressed with her, and decided to make her a famous movie star. He contracted with her and brought her etiquette professors and trainers to train her in acting and dancing. He taught her the basics of the Arabic language, and also chose her artistic name for her. But a while passed and Ahmed Salem did not fulfill his promise to her to make her a famous actress. She took advantage of her social intelligence and was able to reach the artist Youssef Wehbe, who agreed to participate in the movie “The Red Mask” to start her artistic life.

Camellia’s fame began to rise with time due to her beauty and attractiveness. Despite her short film career, her star shone high in the art sky, until she became one of the most famous and highest paid Egyptian movie stars. She became the heroine of a number of famous films. During her career, which lasted for only 4 years, she made 21 films, including: “Fitna, my son, the owner of the pennies, the sweet handkerchief, Brains beats looks, the millionaire, Daddy is a groom, Full Moon, a woman of fire.” The last work in which she participated was the movie “The Last Lie”. Before her death, Camellia was taking her steps to world cinema, as she participated in the American movie “The Road to Cairo”.

In 1949, Camelia met a young man named Salah El-Din, who assured her that he was very wealthy and wanted to enter the field of film production. He offered her to star in a movie called “My Son” for a very large fee of 20,000 pounds. Provided that he plays the starring role in front of her. Camelia agreed to star in the movie, which brought together a large number of great artists, including Mahmoud El-Meligy, Ismail Yassin and Najma Ibrahim.  On the opening night, while Salah El-Din was sitting next to Camelia in the theater, the police entered to arrest the film’s hero and producer, to everyone’s astonishment. Later it became clear that Salah El-Din is not rich, but rather a simple employee working in a company, and embezzled a large amount of money in order to achieve his dream of standing in front of Camelia, whom he loves madly, and the crazy fan of Camelia was imprisoned, which caused the film to achieve enormous profits unexpectedly .

Camelia’s religious situation was complicated, as she had a Jewish name despite her Christian faith, which made her a victim of rumors that she was working with Israeli intelligence. It was said that her closeness to King Farouk and senior politicians in Egypt, was with the aim of conveying their news to Israel. Meanwhile, the Egyptian political police tried to accuse her of being involved in a corrupt arms deal in agreement with the Jewish Agency and British intelligence. However, the king did not charge her directly, for fear that the opposition would accuse him of corruption, considering that he had informed his girlfriend of important political information that should not be disclosed.

On the other hand, Israel accused her of being a spy working for Egypt, after she refused to use her multiple relationships to provide information to the Mossad. It is said that the Jewish Agency orchestrated a plan in conjunction with the British intelligence to get rid of Camelia, especially when she discovered that her fellow actress Raqiah Ibrahim was working for the Israeli intelligence. This is for fear of informing the Egyptian authorities of the matter, which might cause the failure of the plan to get rid of the Egyptian atomic scientist, Samira Moussa.

Her relationship with King Farouk

Coincidence played an important role in Camelia’s meeting with King Farouk, where the first meeting came at a party in Al-Ahram Tower in 1946, where Camelia insisted that she sing and dance when she learned of his presence. She aroused the admiration of the king and got acquainted with her, and they met many times after that day. And their romance began, which was the reason for Camelia’s fame and her transition from secondary roles to starring roles. The king also offered her to travel to France or Switzerland to get married, and it was said that he bought her a palace on one of the Greek islands. Rushdi Abaza confirmed that Camelia had become pregnant with King Farouk, which is the reason why he was ready to marry her, especially as he wanted her to give birth to a son to be the crown prince. But she lost her pregnancy in the sixth month, after she had a minor accident that caused her to miscarry, as she fell to the ground from the horse’s back.

Her relationship with Rushdi Abaza

At the beginning of his artistic career, Camelia and the Donjuan of Egyptian Cinema Rushdi Abaza, specifically during the filming of her movie “Woman on Fire”. At the same time, King Farouk also loved her. This caused a state of conflict between Rushdi Abaza and the king, who threatened him to destroy his film future, and threatened to kill him several times, as he was threatening everyone who approached her. Even King Farouk threatened Rushdi Abaza in public at the “Mina House” hotel, where Camelia was having dinner with Rushdi, and when they learned of the king’s presence at the hotel, they decided to end the evening and hurriedly leave. Before leaving the restaurant, Rushdi was surprised by the presence of a pistol in his back, and when he turned around, he found himself in front of the king, who demanded that he stay away from Camelia, then he lowered the pistol and left. This position increased Rushdi Abaza’s insistence on holding on to Camelia, and the two agreed to marry in October of 1950, after Camelia’s medical trip ended, and before her return to Egypt. Rushdi travels following her to Rome and they marry there to escape the oppression of King Farouk. However, she died two months before marriage. Rushdi Abaza suffered a nervous breakdown and was kept in the hospital for two weeks.

Camellia contracted tuberculosis due to excessive smoking and drinking, and doctors advised her to travel to Italy for treatment. Indeed, Camelia was heading to Rome to conduct some medical examinations when the plane crashed after its engine burned out near the city of Delangat in the Buhaira governorate. Her body was found half charred in the wreckage in the sand. The news of her passing away was announced on August 31, 1950, at the age of 31. Her sudden death, in such a hideous way, raised many doubts and rumors about the cause of her death. Some theorized the Israeli Mossad to orchestrate the incident after news spread that she was a spy. It was also said that King Farouk was fed up with Rushdi Abaza’s competition for her love, and decided to take revenge on her. To this day, the interpretations of her death remain conflicting, to remain one of the biggest mysteries that preoccupied people despite the passage of more than 70 years since her death.

Zubaida Tharwat passed away on December 13, 2016, at the age of 76, after a long struggle with breast cancer. What made matters worse was that she was a heavy smoker, which led to her lung cancer. Where she was receiving treatment for three years before her death.