January 2 marks the first anniversary of the departure of the great screenwriter and writer Waheed Hamed, who is considered one of the most prominent pillars of Egyptian cinema in recent decades. In addition to being a novelist and screenwriter, Waheed Hamed was a member of the Egyptian Writers Union, the Acting Professions Syndicate, the Film Professions Syndicate, the PEN Club, and the Film Writers and Critics Association.

Waheed Hamed was known for his interest in discussing issues of interest to Egyptian society, especially issues with a political dimension. Where he took it upon himself to confront extremist ideology and terrorism in many works such as the films “Birds of Darkness, Blood of the Gazelle” and the series “The Family, the Brotherhood”. He also discussed political and societal corruption in the films “The Innocent, the Ghoul, Playing with the Elders, the Dancer and the Politician, His Excellency the Minister, Tell Shahrazad.” As well as addressing the class differences between the rich and the middle and poor classes in the films “Al-Mansi, Dil Al-Samaka, Laugh, the Picture Looks Good.” Which often offered him to file many cases against him, as well as receiving death threats. Which necessitated the appointment of a special guard at times, fearing for his life. On the first anniversary of his departure, we present to you excerpts from Waheed Hamed’s life, and the most prominent works of art that he could not finish writing before his death, or finished them, but have not yet come to light.

Waheed Hamid was born on July 1, 1944, in the village of Bani Quraish, in the Minya al-Qamh district, in the Sharkia Governorate. He came to Cairo in 1962 to enter the Faculty of Arts, Department of Sociology. During the study period, he was keen on enriching his talent by reading literary and cultural books, and undertaking the world of cinema and theater, hoping to become a distinguished writer. He even managed to publish his first collection of short stories entitled “The Moon Kills His Lover”. Which was read by the great writer Youssef Idris, and advised him to write for cinema and television, which is the advice that Waheed Hamed worked on. He quit short stories and started his journey with scriptwriting achieving dazzling success during his rich career that contained more than 40 films and 30 TV and radio series. He became one of the most important and greatest authors in Egypt.

Works that did not come to light

There are many scenarios written by Waheed, that were never completed due to circumstances and reasons that differ from one work to another, and one of the most important reasons was the need for these works to have a huge production budget. The following is a list of Waheed Hamed’s most prominent scenarios that have not yet seen the light.

In 2006, Waheed Hamed wrote the script for the movie “The Death Boat”, the events of which dealt with the sinking of the ferry “Al-Salam 98” in February of the same year. An accident that preoccupied public opinion at the time, after which killed more than a thousand people who drowned in the waters of the Red Sea. Because of this scenario, Waheed Hamed was subjected to threats that amounted to an injunction from businessman Mamdouh Ismail, the owner of the ferry. However, Waheed Hamid insisted on completing the scenario, even experiencing the conditions of the trip, as he spent more than 3 days on a similar ferry at sea. He also communicated with the families of the victims and the missing, as well as the survivors of the accident. Although the film obtained the approval of the censorship of artistic works, it was not implemented due to the high production cost, which amounted to 50 million pounds.

Farouk the first and last

Also in 2006, Waheed Hamed finished writing the script for the movie “Farouk the First and the Last”, in which he chose to deviate from the prevailing view of the character of King Farouk, using documents that deal in a neutral manner that corrects some negative images that adhere to the king, due to the behavior of his employees or members of his family. in governance. Waheed Hamed had settled on Samir Seif to direct the film, and chose Ahmed El-Fishawy to play the lead role. Then the preparation for the film stopped, despite his contract to sell it to a Saudi production agency.

Waheed Hamed wrote an initial treatment for a movie called “The Junkies”, which deals with the stories of three characters in different times and eras, all associated with terrorist thought. The first is Hassan Al-Sabah, the founder of the Hashashin group, which is the first group to adopt a violent approach on a religious basis. The second is Sayyid Qutb, a hard-line jihadist. The third is Muhammad Atta, the mastermind of the September 11, 2001 operation, who flew one of the two planes that crashed into the World Trade Center towers. Despite obtaining the approval of the censors, Waheed Hamed never started writing the film, which was to be directed by Marwan Hamed.

Waheed Hamed wrote the script for a movie called “134 Days”, which revolves around one of the battles of the October 1973 war, which was known as the “Battle of Kibrit”. It is one of the battles that showed the valor and courage of the Egyptian soldiers during the war. This was demonstrated by the steadfastness of the soldiers of the 603rd Battalion in front of the siege, which was the longest during the war. In order to write the work, Waheed Hamed met the heroes of the battle from the officers and soldiers of the Egyptian army, and listened to their memories of 134 days they spent under siege, hunger, thirst, and lack of weapons and ammunition. After he finished writing the script of the film, he nominated Marwan Hamed to direct it, after which the preparation for the film stopped for no apparent reason.

Waheed Hamed wrote the script for a movie that deals with the life story of the star Amr Diab, and the film was to be produced by the “Alam Al Fan” company, produced by Mohsen Gaber. The choice fell on Sharif, who knew him as the director of the work. But, as usual for Amr Diab’s acting projects, the film entered the cycle of delays several times, in the end facing an unknown fate until now.

The series “The Brotherhood” is considered one of the most important works of Waheed Hamid, in which he dealt with the scandals of terrorist groups, and Waheed Hamid had finished writing two-thirds of the events in the third part of the series, as it was scheduled to be shown the previous year 2021, but he died before finishing writing. The fate of the third part of the work has not yet been revealed

One of the works that Waheed Hamed began writing before his death is the movie “The Sweet Companion”, starring the great artist Yahya Al-Fakharani, and directed by Sandra Nashaat. Which had been scheduled for filming, and stopped working due to Covid-19. Waheed Hamid was scheduled to resume his writing, but he died before completing it. And none of the filmmakers mentioned any details about his fate since the death of its writer.

Despite his great artistic balance and his presentation of many important works that discussed community issues, and expressed citizens’ problems. However, Waheed Hamed’s credit in the list of the 100 best films in the history of Egyptian cinema includes only two works, the first is the movie “The Innocent” starring Ahmed Zaki, Mahmoud Abdel Aziz, Mamdouh Abdel Alim, Ilham Shaheen, and directed by Atef Al-Tayeb, which occupies the 28th place on the list. The second is the movie “Playing with the Adults”, starring Adel Imam, Hussein Fahmy, Mahmoud Al-Jundi, Aida Riad, and directed by Sherif Arafa, which occupies number 90 on the list. 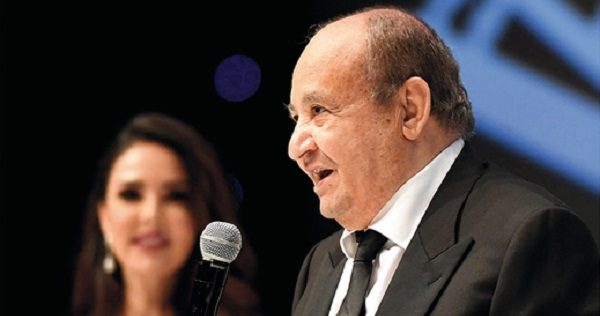 Waheed Hamed received many important awards throughout his life, the last of which was several weeks before his death, where he was honored at the 42nd Cairo International Film Festival, and was awarded the Golden Pyramid Award for Lifetime Achievement. As for the rest of the awards he received, we mention:

Waheed Hamed fell ill, necessitating his transfer to the hospital and he was admitted to the intensive care unit, as he suffered from heart and lung problems and a deterioration in liver function. The great writer left our world on January 2, 2021, at the age of 76, after suffering a heart attack.